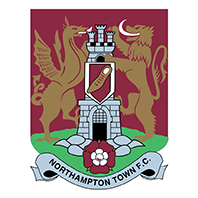 Forest Green Rovers claimed a 1-0 victory over Northampton Town thanks to Jamille Matt’s fifth goal of the season, as Rob Edwards’ side moved back to the top of the League Two table.

Edwards made one change to the side that played out a goalless draw against Exeter City at St James’ Park last weekend, as Dom Bernard slotted into the backline in place of Baily Cargill.

Rovers would produce an energetic start to the game, pressing Jon Brady’s side at every opportunity in what was a physical battle within the first few minutes of the game at the Fully Charged New Lawn.

Edwards’ men almost found themselves in front with twelve minutes on the clock as Nicky Cadden unleashed a thunderous volley from an unlikely angle, forcing Town keeper Liam Roberts to push the ball over the crossbar and ensure his side remained level.

Despite the intensity of the opening fifteen minutes, the game provided few noteworthy chances from that point onwards, before bursting into life just minutes before half-time.

Matty Stevens then would force Roberts into a smart stop as the result of a swift counter-attack which saw the Rovers forward denied, only for the rebound to come to nothing.

Five minutes were added on as the hosts looked for one final opportunity to snatch the lead heading into the half-time, and they almost did just that through Jamille Matt.

The striker found himself on the end of a fine delivery from the right-foot of Dan Sweeney with just moments to remaining, but Matt couldn’t direct his header under pressure, nodding narrowly wide.

Danny Rose spurned a massive opportunity for the Cobblers, with Rose unaware of Sam Hoskins’ low-cross, in what was a slightly nervy moment for the Rovers’ backline just minutes after the restart.

Rovers went close through Jack Aitchison with one of their best chances of the afternoon - the Scottish forward was sent through by Ben Stevenson, only to be denied by a fine stop from Liam Roberts in the 52nd minute.

Rovers came close to breaking the deadlock in the 67th minute, as Kane Wilson made a blistering run down the right-hand side - managing to find space on the edge of the box and unleashing a strike which seemed destined to hit the back of the net, only to be denied by yet another impressive stop from Roberts.

Roberts couldn’t help the ball from falling at the feet of Aitchison though, who would’ve expected to be wheeling away in celebration, only for Matt to see his effort cleared off the line from point-blank range after the Scotsman's cut-back.

The home side would eventually be rewarded for their second-half efforts though, as Matt found himself on the end of Cadden’s cross, guiding his header past Roberts – who this time had no answer with 77 minutes played.

Rovers would manage to see out the remainder of the game despite the visitors’ best efforts, claiming a vital three points.