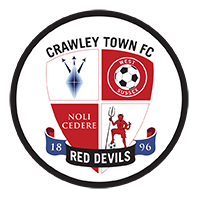 Rovers played out a goalless draw with Crawley Town at the People's Pensions Stadium in League Two.

Jimmy Ball made two changes from Tuesday evening's stalemate with Exeter City - as Jayden Richardson and Odin Bailey earned their place in the line-up following injuries to Nicky Cadden and Kane Wilson, who started from the bench.

It's fair to say that Rovers dominated proceedings in the first-half - and had two close opportunities within the opening ten minutes. Dom Bernard picked up the ball inside the penalty area, before firing his effort over the bar - and that was soon followed by Aaron Collins' free kick catching a deflection at the near post.

Welshman Collins started to prove himself as a real threat to the Red Devils back-line - and had further opportunities to give Rovers the lead. He drove into the penalty area and fired his strike into the side-netting, before his attempted volley on the edge of the penalty area was blocked for a corner.

That wasn't the last of Collins' first-half chances - and perhaps his fourth was the closest. A threaded through ball from Cargill allowed the Rovers forward to beat the offside trap and get around Glenn Morris, but with only the goal to aim for, Collins dragged his strike wide.

John Yems' side really failed to get a foothold on the encounter - and had their first and only opportunity in the opening 45 minutes with only ten minutes remaining. Sam Matthews found space around 20 yards from goal and fired his effort onto the crossbar.

Within the opening few minutes of the second half, Richardson looked like he gave Rovers the lead but was denied by Glenn Morris. The Nottingham Forest loanee raced into the box - and both of his strikes were saved by the home side's stopper.

Fifteen minutes remained when Collins nearly turned provider for Kane Wilson. Once again, he beat McNerney to fire a low cross into the box, but Wilson's strike was deflected from close range.